Do you hear what I hear?

Our two dogs are of varying intelligence and thus responsiveness to our commands. One “off” moves the smart gal from my lap, while the oh-so-lovable-but-slow canine continues to warm my thighs until dumped to the ground.

Their barking has become annoying:  yapYAPyapYAP until the source of  inspiration either disappears from view (other dogs out for a walk, meandering cat, saucy squirrel) or has been thoroughly sniffed (friends who come to the door). Our lovely neighbors, cyclists who pedal up and down the Virginia mountains for dozens of miles, suggested using their “dazzer” to control the barking.

The Dazzer emits an unpleasant sound, audible only in the doggie range. One zap and the smart dog understood and now ceases barking promptly when told, “no bark.” The other dog continues to bark despite the command — and will do so until the Dazzer is used. Which of course is unfair to the dog that was already quiet.

And, as it turns out, also a bit unfair to my younger son, whose youthful ears register the Dazzer. “Don’t you hear that little squeak when you press the button, mom?”

No, I do not. I barely hear Engineer Hubby when he asks me to pass the cream for the coffee. I know I’m not hearing the whining about soup and sandwiches for dinner again, right? 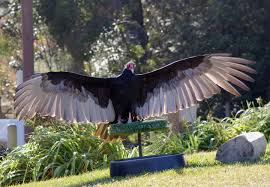 So yet again I discover the very real limits of my (aging) human senses, and, all kidding aside, am momentarily quieted. I wasn’t in awe of the 13 y.o.’s hearing, but it was in the neighborhood (see I know nothing for a dog-taught lesson in humility). I was awe-struck last Sunday when, twenty yards into the woods, both dogs sniffed snuffled snorted snurkled the leaves — speckled with bird poop, huh, look at that, my dull human brain noted — and then both mutts looked straight up and above us turkey vultures were circling, settling on branches, all with their wide, whispery wings. I know they’re carrion feeders and their heads are weirdly bald-looking but still: they are awe-some.

Then I read about the the concept of rewilding — as articulated by George Monbiot in this interview in the fine magazine Orion. He notes that humans are perhaps the most domesticated of all animals, living out our days in relative comfort despite having been designed to survive in a world bloody in fang and claw. We do not often experience the heart-stopping awe that is ours when we wade into the world sans civilized expectations and protections.

I don’t disagree, and/but I when I pause to look at my now-almost-six-foot son, who started as a mere eight pounds; when I see my Grandfather’s wild hair atop my younger son’s head; when I notice EH’s eyes look like his father’s, then I am momentarily awed.

These small details are invisible in the scope of things (the new Cosmos illustrated this for me: I had no idea we (think) we know as much as we do about the universe. The Local Group?) We are, relatively speaking, so very very very tiny. Eensy-weensy. How awe-some is that?

As I near fifty years old* (fifty years! A microscopic pinhead of days in the universe!), I find it easier to remind myself to switch from the daily-annoyances-perspective to the holy-cow-isn’t-this-amazing-perspective, especially when the dogs are pointing out the limits of my nervous system or the scientists my lack of knowledge. (Full disclosure: my family will disagree that I *ever* switch out of annoyed mode, as I nag them nigh unto death about putting away dishes, clothes, shoes, homework, etcetera.)

All I can do is write it down. Badly, baldly, awe-struck-ed-ly, make-up-words-ily. What a ride. Buckle up and look to the heavens and tell us what you see.

* This post dovetails nicely with WordPress’s weekly writing challenge, about “The Golden Years” at their site, The Daily Post